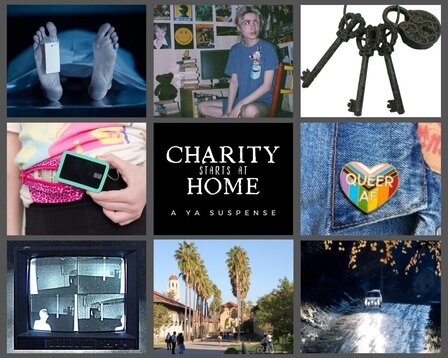 ​Ruth "Nia" Martin has carved out a place in the elite Kenter High by not making waves and by playing down her type 1 diabetes. Junior year, her main goals are to explore her sexuality with the adorable nonbinary new kid and to keep as much distance from her mother’s “DiaMom influencer” persona as possible. Everything fractures with the shocking death of her brother, Noah. Drugs, the police say, and their parents quietly decline an autopsy, not knowing that Nia saw him sober only an hour before.

Then someone anonymously mails her Noah’s keyring, with a series of keys she doesn’t recognize. As Nia digs into her brother’s social circle, she has more and more questions about what Noah was up to, what happened that terrible night, and why her parents are lying about it—​especially because they’re talking about having another kid.

In the titular novella, eighteen-year-old runaway Chloe Grey has a new career (waiting tables), a new love (who also happens to be her landlord), and even a new name (which is the same as her estranged sister's, but only because it sounds cool). Still, she is plagued by memories of her violent mother and a growing sense of unease with her living arrangement. When she runs into someone from her old life, everything starts to unravel.
Shortlisted for the 2016 William Faulkner - Wisdom Award in the Novella category.

Other stories in this collection feature a futuristic fad diet through the eyes of a budding radical, an undervalued detective in crisis situations, and tourist traps both sinister and maudlin. Equally concerned with grim realism and speculative omens, Further: A Novella and Stories dives deep into the loneliness and absurdity of young adulthood. Fourteen of this manuscript's fifteen short stories have appeared in magazines or anthologies; eight have won or placed in contests.

Two aimless college graduates piss off a dangerous customer at work. This story scored first place in its group in the 2021 NYC Midnight Flash Fiction Challenge.

​A human/ghost community wants to grow its numbers, but every stranger is also a potential threat.

A smarmy comedian tries to steal his ex's spot in a stand-up tournament.​